Opening party Friday, October 28, at the Oo Gallery in Kingston, NY. from 8 to 12.  Come on down and check out my painting "A sense of economic loss." (below - click to view larger)

For Oo Gallery information and coordinates, click here.
Posted by norm magnusson at 2:56 AM No comments:

Some people have asked to see the sculpture I made for the "SpOor" exhibition.  Here it is: a reliquary holding a salt shaker containing my fingernails.  The gallery provided this definition of "spoor" in their call for entries:
spOor
noun \’spur, ‘spor\ plural spoor or spoorsDefinition of SPOOR
1 : a track, a trail, a scent, or droppings especially of a wild animal
2 : a trace by which the progress of someone or something may be followed
I immediately thought of a piece I'd done years before.  A salt shaker filled with fingernails.  Maybe 20 years ago.  I'd created it back then as an absurd object, a Dada sculpture.  But now it seemed a strong representation of what it means to be an artist, to share parts of yourself with others.   To leave a trace of yourself out in the world.  Spoor of the artist.  It also brought to mind Piero Manzoni's famous canning of his own poop, (http://en.wikipedia.org/wiki/Artist's_shit) "Merda d'artista" and so, in respect and reference to that iconic work, I entitled my sculpture: "Unghie dell'artista".  Fingernails of the artist.

Posted by norm magnusson at 4:57 AM No comments:

Nice article by Paul Smart on 4'33" in the Woodstock Times

No such thing as silence

Forget all the roaring adrenalin and testosterone associated with rock music over the years; Woodstock’s single most controversial performance, the premier of John Cage’s famous composition 4’33” as part of a benefit program put on by the Woodstock Artists Association at the Maverick Concert Hall on the evening of August 29, 1952, was a quiet affair. Wherein lay the foundations of its legacy, and continuing relevancy…including the reasoning behind its performance at WAAM at 7 p.m. Monday, August 29.

4’33”, first performed by David Tudor on a program of piano works before an audience of the town’s culturati, is silent. At least in terms of its piano playing. It involves three movements, all performed within the time span referenced by its title (formally pronounced as “Four minutes, thirty-three seconds.”) The performer closes the piano lid at each movement’s start, then reopens it at movement’s end. There’s a stop watch on hand to ensure the timing’s right.

“I wanted my work to be free of my own likes and dislikes, because I think music should be free of the feelings and ideas of the composer,” Cage later said of the piece he composed to be performed by “any instrument (or combination of instruments).” “I have felt and hoped to have led other people to feel that the sounds of their environment constitute a music which is more interesting than the music which they would hear if they went into a concert hall.”

Cage later revealed a slow genesis for the project, based on times spent in soundproof rooms, where he learned to recognize the sounds of his own pulse, Zen studies, and a series of blank canvases created by his friend Robert Rauschenberg around the same time.

Also on the program he shared at the Maverick that fateful August evening 59 years ago this week were a Pierre Boulez premiere, several other Cage works, two pieces by Morton Feldman, and The Banshee by Henry Cowell, then considered Woodstock’s premiere composer-in-residence.

“People began whispering to one another, and some people began to walk out,” Cage described the Maverick premiere. “They didn’t laugh — they were just irritated when they realized nothing was going to happen…”

Following Tudor’s performance of 4’33”, the audience was reported to have called for running the pianist and composer out of town.

“They missed the point. There’s no such thing as silence. What they thought was silence, because they didn’t know how to listen, was full of accidental sounds,” Cage continued in an interview from the 1980s. “You could hear the wind stirring outside during the first movement. During the second, raindrops began pattering the roof, and during the third the people themselves made all kinds of interesting sounds as they talked or walked out… And they haven’t forgotten it 30 years later: they’re still angry.”

For this 59th anniversary performance of the late Cage’s masterwork, Mimi Goese and Ben Neill will perform. Goese is known as the lead singer/co-songwriter of Hugo Largo, a minimalist punk/pop group who released albums on Brian Eno’s Opal label, as well as on Luaka Bop, David Byrne’s label. Neill is a composer, performer, producer, and inventor of the mutantrumpet, a hybrid electro-acoustic instrument. He has recorded eight CDs of his music on labels including Universal/Verve, Thirsty Ear, Astralwerks and Six Degrees. The two’s most recent collaboration, Songs for Persephone, will be released on August 30, by Ramseur Records.

“4’33, on one level, seems to be as close to artistic perfection as an artist can get,” this event’s producer, artist Norm Magnusson, said of the Cage composition he first saw performed by composer/percussionist David Van Tieghem, now a Woodstock resident, years ago. “I have always been surprised at how deeply moved I was by the purity of the work.”

There will be a Q&A after the performance with musicologist Kyle Gann, author of No Such Thing as Silence: John Cage’s 4’33”, and Mimi and Ben will play one of their own pieces.++

For more on this performance of John Cage’s 4’33” at 7:00 PM on Monday, August 29, at the Woodstock Artists Association and Museum at 28 Tinker Street in Woodstock, call 679-2940 or visit www.woodstock.org.

For more on local Cage projects, including a current call for new original works to mark his centennial next year in 2012 in a 120 hour transmission performance a year from this September, visit www.free103point9.org. Or tune into WGXC-FM at www.wgxc.org next Saturday, September 3, for a special conversation with Laura Kuhn of the John Cage Trust , located now at Bard College
.

Posted by norm magnusson at 12:18 PM No comments:

The Center for Sustainable Practice in the Arts.

Wow! What a great article in the beautiful CSPA Quarterly magazine, and a swell introduction from Miranda Wright on the editor in chief's comments page: "Our issue closes with, for the first time, a work in progress. Norm Magnusson’s interstate 75 project seemed more than fitting for this issue, whose theme originated with a highway experience."

Here's the article about my project: 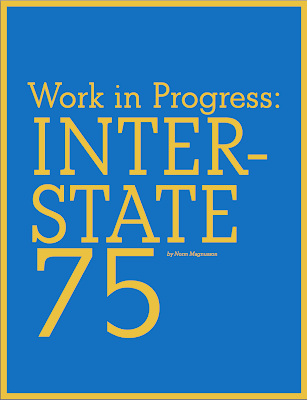 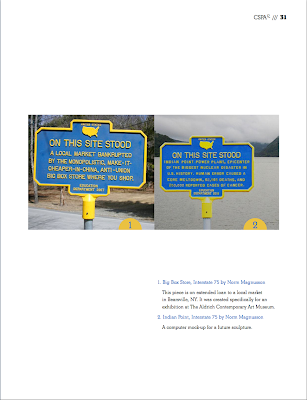 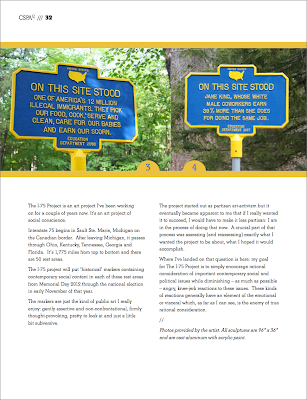 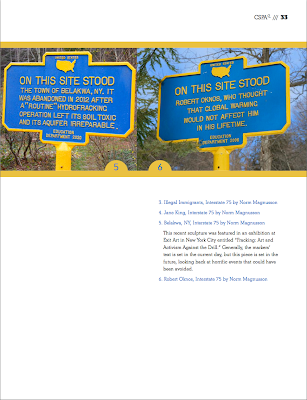 Posted by norm magnusson at 2:34 PM No comments: 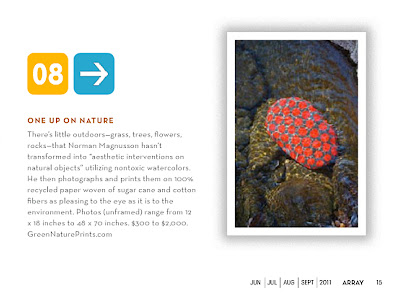 Posted by norm magnusson at 10:13 AM No comments:

FOR IMMEDIATE RELEASE                                                                  Contact: Norm Magnusson
mossmag@aol.com  845-679-6662
http://fourthirty3.blogspot.com/
RESCHEDULED FOR SATURDAY, SEPT. 10 AT 2:30PM
ANNIVERSARY PERFORMANCE OF JOHN CAGE’S 4’33”, HIS SO-CALLED “SILENT PIECE”
Woodstock, NY, September 5, 2011  -  Mimi Goese and Ben Neill will perform John Cage’s famous composition 4’33” at the Woodstock Artists Association Museum (WAAM) at 2:30pm on Saturday, Sept. 10, 2011.  WAAM is located at 28 Tinker St. in Woodstock and can be reached at (845) 679-2940.
The piece was composed in 1952 for “any instrument (or combination of instruments),
and the score instructs the performer not to play the instrument during the entire
duration of the piece.”  It was first performed in Woodstock on August 29, 1952, presented by The Woodstock Artists Association at the Maverick Concert Hall. This will be the
59th anniversary of that performance.
It is an enormously influential piece in the world of art and is considered by many to be the perfect minimalist creation.
Norm Magnusson, who is producing this concert, saw it performed years ago by composer, percussionist, and avant-guardian David Van Tieghem and recounts that he was “surprised at how deeply moved he was by the purity of the work.”  He adds: “4’33”, on one level, seems to be as close to artistic perfection as an artist can get.”  After hearing it performed, Magnusson researched the piece, discovered that it had debuted in Woodstock, and decided to put on an anniversary concert.  This is it.
Mimi Goese is known as the lead singer/co-songwriter of Hugo Largo, the critically acclaimed minimalist punk/pop group who released two albums on Brian Eno’s Opal label. After touring with musician/producer Hector Zazou and co-writing/singing on the Moby album Everything is Wrong, Goese’s solo album Soak was released by Luaka Bop, David Byrne’s label.
Her collaboration with Ben Neill, Songs for Persephone, will be released on August 30, by Ramseur Records.
Ben Neill is a composer, performer, producer, and inventor of the mutantrumpet, a hybrid electro-acoustic instrument. He has recorded eight CDs of his music on labels including Universal/Verve, Thirsty Ear, Astralwerks and Six Degrees. His most recent CD Night Science was released in 2009 on Thirsty Ear.
There will be a Q&A after the performance with musicologist Kyle Gann, author of No Such Thing as Silence: John Cage's 4'33" and Mimi and Ben will play one of their own pieces.
The Woodstock Artists Association & Museum was founded in 1919 to exhibit and collect work in all media by area artists and to support the tradition of Woodstock as the “Colony of the Arts.”  It is a super awesome place that has attained even higher levels of awesomeness by agreeing to host this concert.
Questions?  Answers?  Call Norm Magnusson or Carl Van Brunt at WAAM.
Posted by norm magnusson at 1:00 PM No comments: 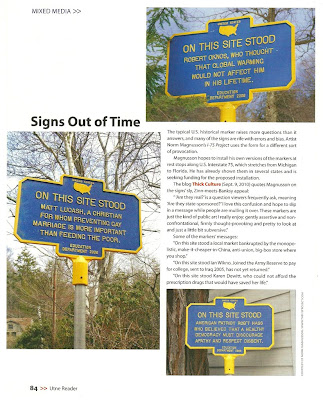 Posted by norm magnusson at 1:05 PM No comments: 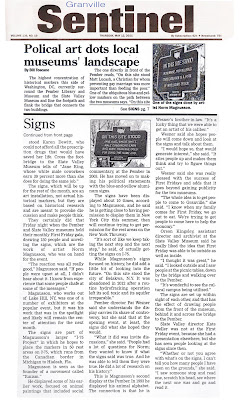 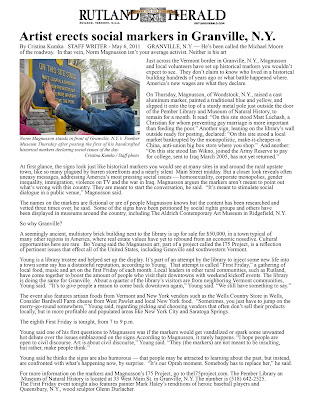 Posted by norm magnusson at 5:59 AM No comments:

Presidential hopeful Donald Trump told reporters today he has come to believe this morning’s Royal wedding is a hoax. “At first I thought, ‘yeah, maybe it didn’t really happen’ but I wasn’t so sure,” the stubby-fingered mogul said, “so I sent a coupla my boys to England to dig around a little.” What they discovered “rocked my socks off,” he added, “I mean, who is this Kate Middleton? Where did she come from? What do we really know about her?”

Trump’s questions about the validity of the Royal union are typical of many people in the so-called “Wedlockers” movement, which has been demanding for hours now that the Royal family produce an actual marriage certificate.

“Oh sure, there are announcements in the newspaper,” said Steve Patch, a self-proclaimed Wedlocker, “but anybody can run an ad in the paper or get the kind of crummy media attention that has surrounded this so-called wedding. Why won’t they just come clean and show the certificate?”

“I think they’ve got something to hide,” added The Donald, “I mean, why else in the world wouldn’t they just show the official documents?”

If Mr. Trump and the Wedlocker movement get their way, the papers will be shown and if they aren’t, the wedding will be annulled. Either way, the controversy has certainly not been bad for Trump’s potential presidential bid, with up to 40% of American’s sharing “a modicum of doubt about the validity of the nuptials” even though only 20% of them completely understood that phrase.

The Queen could not be reached, her minions had no comment and speculation that Kate Middleton would be next Mrs. Trump continued to cause a small tempest in the warm tea cup of Anglo-American affairs.

Posted by norm magnusson at 6:42 AM No comments:

Click on image to see it bigger. Details below. 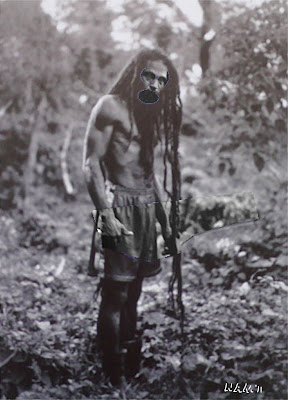 (update: People are asking how I made this. Well, first and most importantly, I signed it on the bottom right with the pencil tool in Photoshop. Secondly, I took the Richard Prince piece which has been getting so much attention and stripped in the corresponding bits from the Patrick Cariou photo that Prince used to make his piece. Done.)
Signed prints of "Reparations" by Norm Magnusson are available as archival computer prints on 100% recycled paper. They come one size fits all: 20" x 15" and are $1000 each, edition of 25. (21 remaining) Contact the artist at NormMagnusson@aol.com.
Posted by norm magnusson at 6:57 PM No comments: